People who have asthma and other respiratory problems (blocked nose, sinusitis, cough etc) tend to breathe a lot more than normal (yes it is possible to breathe too much!)

Over breathing or hyperventilation is breathing more than the body’s requirement at any given time, so if you are seated quietly, but breathing as much as you would need for walking, that is hyperventilation. So you can breathe too many breaths per minute, or too much air per breath, or both. The blood gases can then get out of balance; one of the important changes can be low body carbon dioxide (CO2) or hypocapnia.

CO2 is not just a waste gas; you need a certain amount for healthy body function. 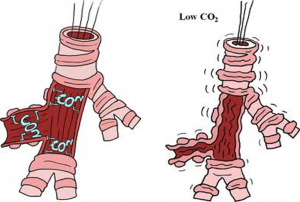 In relation to the lower airways (in the lungs), if you over breathe, the resultant low CO2 levels can encourage airways to constrict, contributing to asthma and feelings of breathlessness and wheezing. This is because CO2 is a natural bronchodilator (you need a certain amount to keep the airways open); CO2 acts on the smooth muscle wrapped around the airways, relaxing the muscle and allowing the airways to dilate or open (see diagram by Victor Lun Rockcliffe). When someone feels an asthma attack coming on they feel breathless and instinctively start to breathe more, often taking in big gulps of air through the mouth. This unfortunately causes more CO2 to be flushed out of the lungs, causing more airways constriction.

– If people with asthma are taught to breathe correctly at the first sign of an attack, the airways can naturally open again (Notice I said at the first signs of an attack. If the attack has gone too far, the airways may close down too far to be helped by better breathing, and that is an emergency so breathing techniques do not substitute for bronchodilators -usually blue reliever inhalers such as Ventolin- in an emergency, so always keep your inhalers with you).

– Hyperventilation can becomes chronic; it may mean that the body has, over time, accepted this abnormal state as normal.  Luckily it is possible to retrain the respiratory centre of the brain to again accept higher amounts of CO2 as normal. Then, as breathing normalises and CO2 levels increase there will be less chance of suffering an asthma attack at all.

Problems with the upper airways tend not to be life threatening, unlike asthma, but they can cause plenty of pain, suffering and misery and poor quality of life. The upper airways can also be opened up by better breathing, helping sinusitis, blocked nose and allergies.

There are 2 ways to increase CO2

–          Breathing less – very little CO2 is in the air we breathe in, most is made in the body and must be accumulated there to healthy levels. You can think of the lungs as a reservoir for CO2, slow gentle breathing allows it to accumulate, whereas fast breathing can deplete it (reducing the breathing is the cornerstone of the Buteyko technique).

–          Exercising more- muscle activity can increase CO2, (this is also encouraged as part of the Buteyko treatment and can be very useful as long as breathing is controlled first).