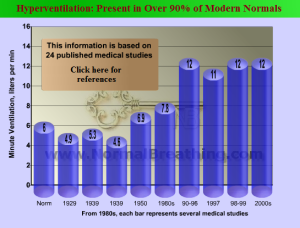 Something has been going on:

20th/21st century lifestyle –all these factors can encourage you to breathe more than you should:

Dr Buteyko defined stress as anything that causes you to breathe more than you need to.

Stress can be emotional or physical.

A good example is someone I know who sustained a very nasty broken leg in a skiing accident. She had the initial physical stress and pain of the injury to deal with; suboptimal surgery in a non- state -of -the -art foreign hospital, of painful travel home; emotional stresses insurance to sort out, weeks off work, immobility, worry about the future, many, many visits to hospital for X- rays that showed lack of annealing of the fracture; the stress of expecting to see the consultant who could handle the complicated case but seeing  junior doctors who gave conflicting advice; further surgery and bone grafts; physical stress of more pain and 6 months of having to sleep on her back to keep the injured leg straight. (You can breathe up to twice as much sleeping on your back as your side).

And what are the symptoms of disordered breathing/hyperventilation? Numerous, including increased pain and panic, which can make you breathe more, depleting your body oxygen and causing a vicious cycle.

A client with ME/CFS described rather well the time leading up to her health collapse as “a decade of crises”- the breathing can slide into abnormality without you noticing, and stay that way as it is eventually accepted as normal. For some, ill health comes out of the blue or “I was fine until I had that cough, then I never really got better” but for many “I just didn’t feel right for several years” with IBS/anxiety e.t.c. creeping up on them.

Many women in their 40’s may find themselves sandwiched between the demands of teenage offspring and aging parents, also holding down a job, with their own needs being ignored. 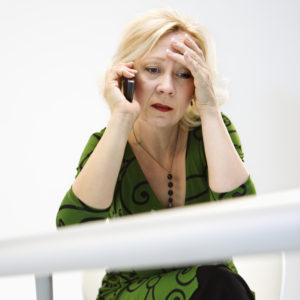 With today’s culture, many people put their job before their health, dosing up on decongestants when they have the flu and soldiering on rather than resting and recuperating.

The work/life balance is a difficult one, I heard someone say she doesn’t have time to look after her health while she is working –it’s OK for retired people!  Something badly wrong there….

Luckily a disordered breathing pattern is something that can be put right; surely it is worth it to safeguard your future health, or improve your current health…
If you would like an email alert for new blog posts, please sign up below: