Do you have a persistent cough or an irritating tickle causing you to continually clear your throat?  Coughing is  one of the body’s  important natural protection mechanisms so you may not think it is much of a problem.

Well it can be – the coughing itself can be exhausting; using all your primary breathing muscles and accessory muscles in your neck and shoulders to lift your rib cage is a lot of effort in itself. Moreover, chronic cough can damage your health by depriving systems throughout the body of their vital oxygen. Fortunately, once you understand the problem, better breathing can help.

A cough may start with a respiratory infection, but how does it become chronic? Actually coughing irritates the airways and makes another cough more likely. So coughing can cause cough, and can persist well after the initial infection has cleared up! So focus on the type of virus/infection may not be important. Trying to isolate the infectious agent may be as useful as knowing the make of car in a road traffic accident to the recovery of the pedestrian in hospital! (a version of this article was first published in NTFA)

So why is chronic cough a problem?

1) Coughing can irritate the airways.
Well when you cough, you will likely take in frequent, large volume breaths of air  than is normal and healthy. This is over breathing or hyperventilation. When you cough through the mouth you are taking in cold, dry, unfiltered air (normally filtered through the nose). The airways can become dry and irritated, and increased forceful airflow can cause damage to the tiny air sacs (alveoli) where the gas exchange takes place in the lungs.

3) Coughing can cause bronchoconstriction/asthma
Carbon dioxide is also a natural bronchodilator. In someone with asthma, coughing will lower the levels of carbon dioxide, which may cause spasm or constriction of the airways and an asthma attack may follow.

5) The body tissues may get less oxygen.
The rest of the body will suffer too as a result of coughing excessively, as the low carbon dioxide stops oxygen getting out of the bloodstream and getting into all the other parts of the body effectively. You may get increasingly fatigued and get more and more symptoms of hyperventilation as time goes by. These can include difficulty concentrating, anxiety, poor sleep, IBS, cold hands and many other seemingly unrelated symptoms. (See a fuller list here).

How to reduce cough

The respiratory centre in the brain can adjust to this big volume breathing and now accept it as normal, making the problem long-term. There are no particularly good medications for chronic cough; the ones that have some effect may work by slowing the breathing. Inhaling steam and oils such as pine and eucalyptus may help temporarily.
Luckily, the Buteyko breathing method retrains breathing, reducing it back towards normal levels, therefore getting at the underlying cause. As the carbon dioxide is able to build up again, the airways open naturally, become less sensitive, and the coughing reduces, naturally.
Hopefully the coughing season is drawing to a close and spring is round the corner (hayfever season!), but below are tips on: 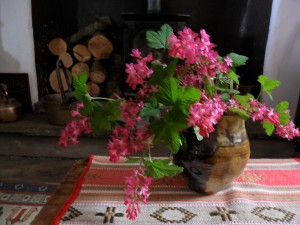 How to stop a coughing fit. (From Buteyko Scotland)
Excess coughing can be unpleasant, tiring and embarassing, but it can also alter your breathing pattern for the worse and bring on an asthma attack.
Coughing Tip 1.
Breathe through your nose all the time, this will keep your lungs and mucus from drying up.
Coughing Tip 2.
a. Sit on a dining room chair
b. When you have a small gap in your Coughing Fit, breathe out through your nose and as you are breathing out through your nose, lean forward and let your head gently fall to your knees
c. This will help empty your lungs of air
d. Once you have very little air left in your lungs hold your breath for 3 to 5 seconds
e. Then start to breathe in through your nose very very slowly (slower the better) while breathing in very very slowly start to raise your head at the same rate as you are breathing in very very slowly.
f. When you have finished breathing in and you are sitting very up right, relax your shoulders and breathe continuously through your nose, let your posture regulate your breathing pattern (posture, sitting very up right on a dining room chair).
g. Be aware of how you are feeling, if you are feeling anything abnormal DO NOT REPEAT the exercise
Coughing Tip 3.
Stop drinking cow’s milk and reduce your intake of dairy products until your coughing is under control.

(This exercise is just a small part of the course training where you change your breathing pattern for the better 24/7. Better health is likely to follow).