The previous better breathing blog post was all about the importance of breathing through your nose, but even before you focus on nasal breathing, you have to cultivate good awareness of your breathing; many people tell me they breathe through their noses, but I observe them mouth breathing without realising. If you have never thought it mattered, why would you notice? I used to be the same. I certainly did not notice that I was taking in gasping breaths through my mouth when I was speaking. Now I can breathe in calmly through my nose when speaking, most of the time anyway.

Remember that the MORE you breathe, the LESS oxygen you are getting.
So it is important to know how you are breathing when you feel dizzy or tired, as you may have INCREASED your breathing (hyperventilation – breathing more than you need).
I remember I must have learned from my mother that you had to pant through your mouth when mopping the floor. Well you don’t have to. I remember I used to have to rest every few minutes mopping like that, but when I found out about better breathing, I had much more stamina and could keep going for longer if I did the housework while breathing all the time with my mouth closed.
Another time you may feel faint or tired is when bending, for example emptying the washing machine or picking things up of the floor or gardening. Are you emptying your lungs? Are you breathing out a massive out breath and then a massive breath back in? This large volume breathing can deplete the body of oxygen (NOT increase it!) and make you feel dizzy or tired. I remember before I knew about disordered breathing, I could not bend to pick up a stick and throw a stick for my dog more than two or 3 times without feeling weak and exhausted, yet I watched an old lady (probably 30 years my senior) bending and throwing a ball for her dog many times with no ill effects. Eventually when I understood about healthy breathing, I was able to change my habits and increase my stamina. 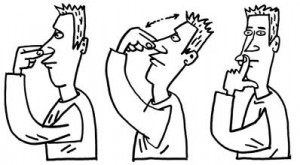 But my nose is blocked so I have to breathe through my mouth?
A lot of people think this, but Dr Buteyko taught us that the nose blocks up because of the over breathing or hyperventilation caused by mouth breathing. In fact for the majority of people, it is easy to unblock the nose using a simple breathing exercise. However, the nose will soon block up again unless you learn how to breathe well ALL the time. 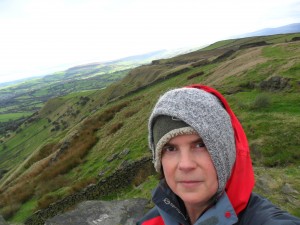 It is impossible to breathe through your nose when exercising isn’t it?
Well NO, you should be able to learn to do it, it took me about 2 weeks and I could walk up my local High Peak hills breathing through my nose. Once someone asked me why I wasn’t out of breath! But I have learned to pace myself so that I can live life at the pace that I can breathe through my nose. So I might not win any races, but I can now walk for miles up and down hills, something at one time I thought I would never be able to do again. You can see the not very flattering selfie of me at the top of a local hill, an hour’s steady climb. You may feel that you have to go frustratingly slowly to begin with, but it may just be worth it. And you may not be walking up hills for a while, but try just when standing up from a seated position, or climbing stairs in your house- go as slow as you need, but be in better shape when you get there!
And here is someone at the other end of the fitness spectrum, an Olympic athlete who learned Buteyko breathing and wins, looking so relaxed! I will leave you to work out which one she is (you can click on the picture to enlarge it). 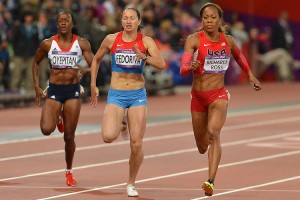 And some more inspiration, watch Charlie dancing here, all that stamina, and his mouth closed the whole time.

I may be labouring the point here a bit, but here is Mireille Mathieu, singing and nasal breathing about 80% of the time.

Any more excuses?
In short there are few excuses. I even know of a man in his 60’s who had been kicked in the nose by a horse when he was a child, and had been a mouth breather since. Even he was taught to breathe through his nose again by a Buteyko breathing educator. However, changing the habits of a lifetime can be challenging, I know.
Perhaps I sound a little obsessed with nose breathing, but some of my clients have had noticeable improvements in some of their symptoms just by focusing on nasal breathing.
Give it a try, you have nothing to lose (but your symptoms?). Oh and don’t forget to let me know how you get on.
If you would like an email alert for new blog posts, please sign up below: